As readers may already have seen, former U.S. Supreme Court Justice John Paul Stevens has died at the age of 99.  (He had just recently come out with a new book, The Making of a Justice:  Reflections on My First 94 Years.)  Over the course of his long career on the bench, he authored many important opinions, including some on IP and antitrust.  Sometimes I agreed with him, sometimes I didn't, but I think he will long be remembered as a voice of reason.

On a personal note, I had the honor of meeting Justice Stevens once, back in 1987, when he interviewed me for a clerkship.  I didn't get the job--I'm sure there were other candidates much more qualified than I was--but it was a thrill for me nonetheless.  The thing I will remember most is when he showed my a baseball he kept on his desk, autographed by his (and my) favorite team, the Chicago Cubs. 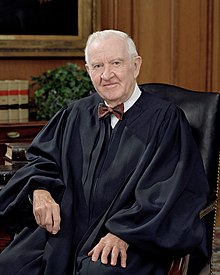 Posted by Thomas Cotter at 6:29 PM