From Around the Blogs

1. Mark Cohen has published a very interesting post on the China IPR Blog titled The Pushmi-Pullyu  of Chinese Anti-Suit Injunctions and Antitrust in SEP Licensing.  The post states that, while Chinese courts have pulled back on issuing antisuit injunctions in relation to global SEP disputes, China's State Administration for Market Regulation (SAMR) may be poised to use antitrust law to penalize firms that the SAMR views as engaging in the abuse of IP rights, for example by violating FRAND commitments or unfairly requesting a foreign court to enjoin the use of IP rights.  As Mr. Cohen notes, this could be a much more significant tool in China's hands, given that the Antimonopoly Law permits punitive penalties of up to 50% of a firm's annual review.  Wow.

2. On IPKat, Hayleigh Bosher published a brief post noting that UKIPO has published the responses received to its December 2021 call for views on a variety of SEP-related issues (available here).  as the author notes, "there was little consensus on the nature, extent, causes, and impact of problems in this area, with SEP holders and implementers often advancing opposing arguments".  No big surprise there, I guess.

3. Both FOSS Patents and JUVE Patent published posts noting that OPPO has decided to exit the German market, for the time being at least, in response to a loss of two SEP cases in Munich.  Meanwhile, Roberto Rodrigues Pinho published a post on the Kluwer Patent Blog discussing two recent cases, both brought by Genentech, addressing the availability of preliminary injunctions in Brazil.

4. On Law360, Mark Liang published an article titled Post-Arctic Cat Lawsuits Reveal Patent Marking Pitfalls.  As anyone who follows my work is aware, the U.S. patent marking statute is one of my long-time bugbears--I would abolish the marking requirement altogether--but as long as it remains, it does create a lot of pitfalls for the unwary.  The specific pitfall that Mr. Liang points out in his article is one that I haven't focused on in my discussions, however, namely the various standards district courts have applied to determine whether a defendant has timely notified the plaintiff that the defendant intends to pursue a failure-to-mark defense to the plaintiff's damages claim.  As if patent litigation isn't complicated enough . . .  Also on Law360,  Jonathan Engler, Michael Renaud and Jessica Perry published an article titled Enforcing Patents Isn't Easier As America Invents Act Turns 10, stating that "out of almost 7,000 patent jury awards in cases filed after 2012, only 32 high-technology awards exceeded $30 million," and the Federal Circuit has only enforced one of these (though many of them--it's not clear to me from the article exactly how many--either settled or remain pending).

5. Update (August 17):  On JUVE Patent today is an article by Mathieu Klos titled "One year since the new German patent law, the injunction remains the same".  Title pretty much says it all:  according to the author, "German patent courts have not issued a hardship decision in favour of an infringer in any case decided since August 2021," when the law explicitly permitting them to withhold or delay injunctive relief went into effect.  The author also notes, however, that German courts do act with a sense of proportion when they require plaintiff to post "high security payments . . . for provisional enforcement."

Posted by Thomas Cotter at 8:02 AM No comments:

I just learned about the publication of this new edited volume yesterday.  It is titled Injunctions in Patent Law: Trans-Atlantic Dialogue on Flexibility and Tailoring (Jorge L. Contreras & Martin Husovec eds., Cambridge Univ. Press 2022), and it is available on an open-access basis (i.e., for free) here.  (You can also buy a print copy from the preceding webpage, if you like.)  I haven’t had a chance to read very much of it yet, but it looks like it will be a useful resource.  Here is the book description:

Patents are important tools for innovation policy. They incentivize the creation and dissemination of new technical solutions and help to disclose their working to the public in exchange for limited exclusivity. Injunctions are important tools of their enforcement. Much has been written about different aspects of the patent system, but the issue of injunctions is largely neglected in the comparative legal literature. This book explains how the drafting, tailoring and enforcement of injunctions in patent law works in several leading jurisdictions: Europe, the United States, Canada, and Israel. The chapters provide in-depth explanation of how and why national judges provide for or reject flexibility and tailoring of injunctive relief. With its transatlantic and intra- European comparisons, as well as a policy and theoretical synthesis, this is the most comprehensive overview available for practicing attorneys and scholars in patent law. This book is also available as Open Access on Cambridge Core. 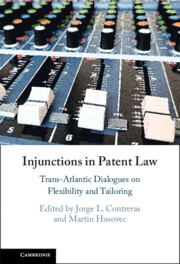 Posted by Thomas Cotter at 8:59 AM No comments:

Dijkman on the Injunction Gap and Fair Trial Rights

In a previous article, I examined the so-called ‘injunction gap’ from the perspective of the right to a fair trial enshrined in Article 6 of the European Convention on Human Rights.  This article extends the analysis to Article 47 of the European Union’s Charter of Fundamental Rights, which is the EU equivalent of Article 6.  The European Court of Justice has applied Article 47 Charter to procedural constellations where issues were divided over different proceedings before different courts.  These decisions offer insights for the application of Article 47 Charter to Germany’s bifurcated system of patent proceedings and, in particular, the safeguards that should be afforded to defendants in this system.  The article concludes that if the six month period for a qualified opinion by the Federal Patent Court, as per the new § 83 German Patent Act, fails to resolve the injunction gap problem in practice, a stay of proceedings as per § 147 German Code of Civil Proceedings remains the most promising tool to do so.

Although the article was completed before the CJEU’s decision in Phoenix Contact GmbH & Co. KG v. Harting Deutschland GmbH & Co. KG, previously discussed here, the author correctly predicted that the court would find the practice of presumptively denying preliminary injunctions in cases in which the patent’s validity had not been determined in first-instance proceedings at odds with article 9(1) of the Intellectual Property Rights Enforcement Directive.  He further proposed that such an outcome would have “two important consequences,” first that it would “require infringement courts to make preliminary assessments of a patent’s validity in interim relief proceedings,” and second that “a greater availability of interim injunctions may make stays of merits proceedings more palatable to infringement courts” since interim relief would still be available “in truly urgent cases” (p.863).

Posted by Thomas Cotter at 8:51 AM No comments:

I will be taking a blogging break next week, August 1-5.

Posted by Thomas Cotter at 8:38 AM No comments:

Here is the order in this matter, previously noted on this blog here.  Stories elsewhere on Law360, Bloomberg, and FOSS Patents.  The court finds no "imminent, irreparable harm," and further states that while it "has some level of sympathy for the frustration visited upon Apple by Ericsson’s strategic conduct in other diverse forums . . . such sympathy does not excuse a misuse of this Court’s rules regarding emergency motion practice."

Posted by Thomas Cotter at 8:38 AM No comments:

The case is Realtime Adaptive Streaming LLC v. Netflix, Inc., precedential opinion by Judge Chen, joined by Judge Newman and by Judge Reyna concurring-in-part and dissenting-in-part. The first three paragraphs of the opinion summarize the facts leading to the imposition of fees:

Plaintiff-Appellant Realtime Adaptive Streaming LLC (Realtime) filed three separate patent infringement actions against Defendants-Cross-Appellants Netflix, Inc. and Netflix Streaming Services, Inc. (collectively, Netflix). Realtime first asserted six patents in the District of Delaware. While the Delaware action was ongoing, Netflix filed seven petitions for inter partes review before the Patent Trial and Appeal Board seeking a determination that many of the claims asserted in the Delaware action were unpatentable. Netflix also moved to dismiss the complaint for failure to state a claim, arguing that four of the six asserted patents were ineligible under 35 U.S.C. § 101. Netflix fully briefed, and Realtime full responded to, those patent-ineligibility theories. Following institution of all seven inter partes review proceedings and a thorough report and recommendation from the Delaware magistrate judge finding claims of four of the patents ineligible under § 101, Realtime voluntarily dismissed the Delaware action—before the district court could rule on the magistrate judge’s ineligibility findings.

Although Realtime was done with Delaware, it was not done with Netflix. The next day, Realtime started fresh, re-asserting the same six patents against Netflix, this time in the Central District of California—despite having previously informed the Delaware court that transferring the Delaware action across the country to the Northern District of California would be inconvenient and an unfair burden on Realtime. Netflix then simultaneously moved for attorneys’ fees and to transfer the California actions back to Delaware. Prior to a decision on either motion, Realtime again avoided any court ruling by voluntarily dismissing its case.

I concur with the majority’s holding that the district court did not abuse its discretion in awarding fees under its inherent powers to sanction. I dissent in part because I  also believe that the district court did not err in determining that two voluntary dismissals without prejudice is sufficient to confer prevailing party status under 35 U.S.C. § 285.

Posted by Thomas Cotter at 9:13 AM No comments:

Cotter on U.S. and German Approaches to FRAND Disputes

I have a new paper on ssrn, titled Like Ships That Pass in the Night: U.S. and German Approaches to FRAND Disputes, forthcoming in FRAND: German Case Law and Global Perspectives (Peter George Picht, Erik Habich & Thomas F. Cotter eds., Edward Elgar Publishing Ltd. 2023).  Here is a link to the paper, and here is the abstract:

The U.S. and German approaches to resolving disputes involving FRAND-committed standard-essential patents (SEP) diverge in many respects. While U.S. courts are reluctant to award injunctive relief in SEP cases, but have shown some willingness to determine FRAND royalties in both bench and jury trials, the German approach is precisely the opposite—with German courts interpreting the CJEUs decision in Huawei v. ZTE as authorizing awards of injunctive relief in many instances, while showing little enthusiasm for actually determining FRAND royalties themselves. The U.S. and Germany also differ in their tolerance for antisuit injunctions, which have become a recurrent topic in global FRAND disputes; and the countries’ perspectives on antitrust law differ fundamentally as well, with antitrust providing one of the few avenues for denying injunctive relief in Germany, while having relatively little bearing on SEP disputes in the U.S. thus far. These divergences reflect not only important differences in legal cultures and institutions but also, arguably, different understandings of optimal innovation policy. One way to transcend these differences might be through the establishment of a global FRAND tribunal or mandatory FRAND arbitration, as others have suggested, though whether such a solution will ever be forthcoming remains to be seen.

Posted by Thomas Cotter at 9:19 AM No comments: